A month in Spain – I’ve returned feeling restless and unhappy with my lot.

This has happened before – I’ve felt worse about my everyday reality on return than I did before I went. Though this year I needed the holiday more than I’d ever felt I needed one before – so maybe that’s what’s turned me into this apathetic shuffling slob; the epicentre of malcontent…

It’s not even that the holiday was ‘the best I’ve ever been on’ or similar.

Though it was restful.

A month in the Priorat. Torroja del Priorat. A very small mountain village: five and six storey 17th, 18th and 19th century houses clinging to a mountainside – just finding space amongst olive groves and the most steeply terraced vineyards I have ever seen. So steep, in fact, that all grape-picking has to be done by hand.

The village was eerily silent from 10am until about 7pm – aside from the first week when bottling was underway in the massive Comarca building which sat at right angles to ours. You’d hear voices from behind the huge wooden arched doorways of village homes – and from the courtyards and cellers which lay beyond. You’d smell cooking – the garlic and the smoked paprika and the olive oil scenting the air. But you’d seldom see anyone.

Unless you were at the communal village pool – which itself lay on the highest plateau (signposted ‘Part Alta’ of Torroja), giving views of Torroja rooftops from at least 200 feet above and beyond that, giving panoramic views to Gratallops (Grata-yoops) and right across the vastness of the valley.

It is hard to do justice to the beauty of the place. Photographs from an iPhone just don’t cut it.

Evan was with us for the first 9 days. Despite the quiet of the place he enjoyed his stay. There wasn’t a lot to do – besides swim, rest, walk, eat and drink and admire views – not usually high on any 17 yr olds’ holiday agenda. Our days began to blur into one big day… with the church bells – so intrusive and loud to begin with – becoming muffled and then lost in our sleepy haze.

We ventured down the mountain most days. We were 40 minutes from Cambrils and Salou – a perfect distance. Not too far if we wanted to join other holiday makers on the perfect beaches of the Daurada – just far enough to avoid them becoming the focal point of the break and changing the balance of the holiday entirely.

Cambrils is still a working fishing village – though its primary income must come from tourism and package holidays.

Cambrils merges into Salou – which merges into La Pineda and Port Aventura and latterly into the industrial hinterland of Tarragona. Salou and La Pineda are purpose-built package holiday Meccas (mainly for the Russians) – with Port Aventura advertised as ‘the largest theme park in Europe’.

We didn’t go. My youngest children have a warped fear of fun fairs and water parks. They would’ve tholed a visit if their older siblings had been with us (though Lew has a pathological fear of water parks and heights…) – but they would not be convinced that a visit would be a good thing – branding it ‘boring’ and refusing to explain beyond that.

In fact, if I am honest, Jamie is at that awkward age where everything (aside from loitering in Lanark with his mates) is ‘boring‘. Ana just copies him. Though if you’d to point that out to her she would swear blind that he was copying her.

Mind you – on our return it was hilarious listening to Jamie describing the places we visited to my Mother. All those astonishing, overwhelming and beautiful places which had been written off by him as ‘boring’ at the time were suddenly ‘great’, ‘really interesting’ ‘enjoyable’ ‘fantastic’…

Tarragona really was a surprise – which really highlights my ignorance. Formerly Roman ‘Tarraca’ (at one point the capital of the Roman Empire), the city visibly rests on its Roman foundations – concrete blocks of multi storey flats built onto the exposed massive blocks of Roman sandstone and of Roman streets.

A short walk from the impressive 1950s Rambla Nova (built to a style proscribed by Franco), down narrow streets and you are suddenly confronted by a preserved Roman street  – a raised and incongruous plaza surrounded on four sides by modernity- the newer city peculiarly 30-40 feet lower than the ancient.

The Roman amphitheatre is breath-taking. The engineering that went into its making is astonishingly advanced. And it commands views right over the Mediterranean Bay. Deliberate – a show of wealth and power. And it would have been a place of gore and death. But today – well…

The medieval quarter was impressive too. Lots of narrow cobbled streets, marble steps and blindingly white sandstone (there was the ubiquitous clean-up and conservation project on the go). The Cathedral was very attractive as churches go – though I’m never much into all that glitter and gold and bloodied Christs that make up the interior.

We sat in the street cafes and ate the tapas and drank cervesa and the salty sparking Vichy Catalan (this is Catalunya after all). We gorged on olives – mainly arbequina – small and hard and aromatic. And on chiperones and boquerones and calamares. Jamie would eat little but calamares or chiperones bocadillo. With patatas bravas – chips, really! Ana existed on croquettas (any but usually chicken or ham); on chorizo and on melon and curado de jamon serrano. And tortilla. And rabbit stew.

We took the bus to Barcelona. And were humbled by the city. From Parc Guell to Camp Nou; Barcelonetta and the old Bull Ring; to the Sagrada Familia, the Ramblas, the Bouqueria and the Placa de Catalunya. Too big for two short days. A taster which has us planning our next visit.

Reus was also a surprise. Don’t write it off as ‘just the airport place’. Perfectly proportioned placas – fringed by perfectly proportioned buildings – covered in Catalan Independence flags… The Gaudi Museum is worth a mention. And the food was very very good – fast, fragrant and fresh. Lots of seafood – and everything served with flat leafed parsley (an old-fashioned herb which is mostly relegated to soups and stews here).

And Sitges! That elegant Riviera-like seaside town. Gay, stunningly beautiful, just the right side of seedy. I need to find our photos -but here is a little taster: 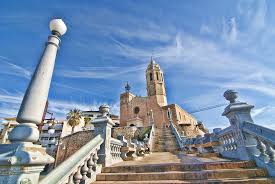 Spain. Catalonia. Ah. I loved reading about their Indyref…

There is nothing about this country that I do not love. Whether Castilian; Galician; Navarrese, Basque or Catalan (apologies to all those I’ve missed) – I love Spain.

It is a country built for people. The public spaces are beautifully maintained; easy to use and as a result, well-used; and they prioritise people over commerce or cars. Cities are alive. Unlike here, city centres are human and lived in – with residential properties and the needs of their inhabitants met by the commercial properties which are their servants (not their masters). Their pedestrian crossings prioritise people.

Spanish engineering and design is advanced and it works… Not for them dank concrete crumbling multi-storey car parks – instead the air conditioned vast and deep (sometimes four levels down) underground car parks which direct you with electronic arrows to your space; or the roads that tunnel through the Garaf mountains – for a km or more; or the road system that is so well-signed that we didn’t use our maps or satnav despite travelling 3100kms over the month. The modern architecture is astonishing – striking beautiful floating boxes of glittering granite and marble and glass and metal. But otherwise the blend of Colonial spanish with Gothic; beside Gaudi or Gaudi-esque and Romanesque and Mudejar-style buildings -these are the buildings that populate my dreams.

The village we lived in was poor. The lifestyle of locals was simple and revolved around farming. With a few rich in-coming foreigners having bought into a lifestyle and offering a slice of that lifestyle with the Hotel Abadia del Priorat (a casa rural) or similar. But Fincas with large plots of land can be bought for as little as 35000 Euros.

Rents – even in the cities – are affordable (or look as if they are from this Scottish perspective). With three and four bedroom apartments in good areas going for 400-500 Euros per month – a fraction of what would be paid here – though admittedly wages are lower and the economic situation very different.

I’ve come back to a cold house that desperately needs a new boiler (the current one is done, finished, over); to quotes of £3500 min; to rain and to the fear that I will not be able to hold out doing this job until the new business is up and running.

I’ve allowed myself to sink a bit. General unhappiness with my lot made worse by the brief vision of a life lived elsewhere.

Ach. I’m not daft. I know that there’s a great deal to be thankful for. Not least, Dad’s radiotherapy is proceeding without too many problems and he’s upbeat and looking well. And I’ve always known that change must come from me – so I’ve only myself to blame if I’m still unhappy in the same way this time next year,,,

Here’s my favourite photo of the holiday. It’s a grumpy Ana – not happy that her three hour stint in the pool had to come to a siesta-end…